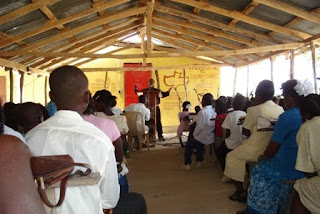 Hi everyone. I’m not sure how many of you know that there are at leas two Calvary Chapel churches in Haiti. One of them is in Porta-au-Prince, and the other in Caneille. Praise the Lord that both pastors and their families are safe and being used by the Lord in a great way right now. The church and orphanage in PAP though not totally destroyed still suffered some pretty severe damage structurally – enough so that nobody is staying at either facility. The church in Caneille didn’t suffer any damages and is being used currently. Pastor Bastia and his wife Betty from C.C. Caneille have a great testimony of how the Lord protected them during the earthquake last week. Below is an email that we received from them the day after it took place.

We are writing this e mail to the many who have written and asked how we are in light of yesterday’s earthquake in Haiti. Short answer – Yes, Bastia and I are both safe and unharmed due to nothing short of a miracle of God..

Bastia and I were both in Port au Prince when the earthquake took place. Bastia dropped me off at a grocery store to do some shopping while he and our friend TiJean went across the street to get their hair cut. Within 10 minutes of being in the grocery store, I felt the floor start to tremble. I remember thinking, “This feels like an earthquake, but Haiti doesn’t have earthquakes”. As I looked up, the ceiling tiles were trembling. Underneath me, the trembling increased where I could not stand, so I knelt down on the floor, covered my head, and prayed. The trembling increased and the lights went out. It was pitch black everywhere. I heard people screaming and the sound of people trying to run to get out of the building as ceiling tiles fell and things fell off the shelves. All around me, I was aware that things were falling, but nothing touched me. The tremors stopped, and the first thing I tried to do was try to call Bastia from my cell phone. No answer, just a recorded message in Creole. Same thing the second attempt. I was aware that there was a woman behind me. “Are you OK?” I asked. “Yes”. I said, “Don’t be afraid, Jesus is with us.” I told her to follow me, and with the light of my cell phone, we carefully and slowly began crossing the debris to exit the building. As I exited, I looked everywhere for Bastia. And then, right there in front of me, there he was along with TiJean. I cannot explain the relief and joy to see his face.

Bastia had a more harrowing experience. It was a huge cement building and he and TiJean were sitting in the barber chairs when the tremors began. TiJean fell on the way out, but got out before the building collapsed. Bastia was not able to get out and a huge slab of cement fell down right above him and stopped right above his head. I personally believe Gods’ angels were holding up the cement to not crush him. He saw no way to get out, but then found a hole to crawl through and escaped. This morning, when we drove by the same barber shop, it had totally collapsed, and Bastia would have died if that had happened while he was in the building. Once out, he and TiJean came immediately to find me.

We are praising God continuously for His protection and deliverance. Thank you for all who pray for us. God has a plan and nothing will stop it. The situation in PAP is severe. Many people are trapped in buildings of which almost all are made of cement. This morning there were wounded, bleeding people everywhere, and dead people on the streets who were covered with a shirt or sheet. There was little vehicle traffic and literally thousands of people walked the streets looking at the damage and searching for their loved ones. One hospital was completely destroyed. We took a truckload of injured people to the hospital. There was hardly a place left on the hospital grounds to even put them. The hospital was full and there were no medical personnel seen outside. One beautiful young girl was dying before my very eyes as the young man with her looked at me and said, “She’s dying.” There were cries and wails of pain everywhere.

Schools throughout the entire country are closed till further notice. The presidents’ house has been destroyed as well as the police station, hospital, schools, many businesses, homes,etc. No one here ever recalls Haiti having had a severe earthquake like this. In Caneille and Hinche, light tremors were felt, but no damage. The light tremors hit Caneille and Hinche before PAP, and the people of Caneille said they were praying for us fervently and relentlessly. We arrived back in Hinche this afternoon and are trying to stock up on food, gas, and culligan water. Everything originates from PAP and we expect prices to skyrocket and things to be unavailable.

C.C. Philly is now working with these two churches, and we are currently praying on what the best way is to help them in the long term. Regarding trips there, this will probablly be a reality in the next couple of months. Keep an eye on our website , or this site for more information on short-term trips.