At 9:05 PM, May 20, 2009 Ralph Winter, the founder of the U. S. Center for World Missions went home to be with the Lord.  I never met this man of God, but I have been deeply touched by his ministry.  In many ways it directly impacts what i do on a daily basis.  You see it was Dr. Winter that first talked about the term “unreached peoples” at the Lausanne Conference on World Evangelization in 1974.  The shattering truth that was revealed at this conference was that in spite of the fact that every country in the world had been penetrated by the gospel, four out of five non-Christians were still cut off from the gospel because the barriers are CULTURAL and LINGUISTIC, not geographic. He called not recognizing this fact as “people blindness”, blindness to the existence of separate peoples within countries.  In 1982 the term “people group” was then translated as

” a significantly large grouping of individuals who perceive themselves to have a common affinity for one another because of their shared language, religion, ethnicity, residence, occupation, class, or caste, situation etc. or combining of these.  It is the largest group within which the gospel can spread as a church planting movement without encountering barriers of understanding or acceptance”.

Thank the Lord that since then, many, many churches and ministries have been focused on reaching the unreached that was defined back in 1982.  Dr. Winter and his team at the U.S. Center for World Missions have written out the stages of reaching these people groups in the following summary.

Stage 1-“Reported” The people group is brought to the attention of a Christian research group which strives to verify them as unreached and lists them as such.

Stage 3-“Adopted” One, or several, churches or fellowship groups (could be a mission fellowship, student group, Sunday School class, etc.) has made the establishment of a strong church among the unreached people group their personal goal. They agree to support the work with prayers and finances. This is done with their denomination or in partnership with one or more mission agencies.

Stage 4″Engaged” The work has begun and cross-cultural workers are “on site” with the goal of establishing a “viable, indigenous church-planting movement.”
A people group may already have been engaged when a church or fellowship group chooses to adopt. The church then commits itself to partner with the “on site” workers.

Stage 5-“Reached” A strong, indigenous church-planting movement has been established that is of sufficient size and strength to evangelize the rest of the group with no (or very little) outside help.
“Reached” does not mean the work is done, but the missionary thrust is closing and the evangelistic phase has begun which is now the responsibility of the indigenous church. They have moved from unreached to unevangelized.

This is something that C.C. Philadelphia believes in, and is currently supporting with our work among the Tarahumara in Northern Mexico, as well as the Tabwa people in the Katanga province of the DRC.  Please join with me in praising the Lord for all the ways that He has used Dr. Winter, and to also pray that more and more churches, believers, and ministries would join hand in hand with these efforts to see Christ treasured among those who have never heard.

To know more about the U.S. Center for World Missions check out their website HERE. 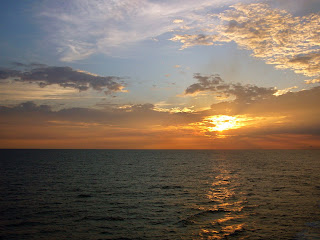 West Indies Sunset – A light in the darkness.

Sorry this is so last minute, but among other things I want to write about, I just wanted to let everyone know that Ron and Bridget Wint will be speaking at our Missions Prayer tonight at C.C. Philly in the Prayer Room.  They haven’t been home since they left to go to Zambia as full-time missionaries over 3 years ago.  If you can make it out, come and listen to them share about what the Lord is doing there in North-Western Zambia.

Since my last post I have been in the West Indies close to Trinidad and Venezuela, as well as in Maryland on the Chesapeake Bay at a Pastors Conference for Calvary pastors up and down the East Coast.  We had the privilege to hear from some incredible men of God including one who is 86 years old and has been serving the Lord in full time ministry for over 60 years. I’ll be writing more about the things the Lord showed me through these guys in my next post, but for now, I wanted to finish with my thoughts on those verses in Romans 13 that I was previously writing about.

While traveling around this past month, and having lots of time to spend listening to the voice of the Lord, it seems like He has been impressing on my heart this one theme – that the “night is far gone, and the day is at hand, so then let us cast off the works of darkness and put on the armor of light”.  I was talking with my son the other day about why he is scared to go upstairs by himself.  He told me “Dad I don’t like to go upstairs by myself because it’s to dark up there”.  I told him “Evan, you don’t have to be scared of the dark, just turn the light on, and go upstairs”!  I then began to talk to him about how Jesus called Himself the Light of the world, and how as believers we are called to be light in a dark world.  I’m not sure if he totally grasped all of that yet, but it was just another reminder to me to make sure that in ALL that I am doing, I MUST be putting on the armor of light.  I began to pray and ask the Lord to make me shine in EVERY situation.  Every area of my life must be given to the Lord in order to let Him shine through me to this dark and sinful world.

The day is at hand – I really believe that brothers and sisters.  The Lord desires so much to use our lives as a beam of light in our world.  And the darker our world or our country gets (and it’s getting pretty dark out there), the brighter our lights will shine.  It’s hard to try to write down all the things the Lord is showing me personally about this subject, but I do know that it’s been a theme in my life as of late, and I just want to encourage you guys to make sure that in all areas of our lives, the Lord is shining through to the world that is constantly watching us.  The time has come, let us cast off all works of darkness, and put on our Lord Jesus Christ!

“And they that be wise shall shine as the brightness of the firmament; and they that turn many to righteousness as the stars for ever and ever.” Daniel 12:3

Posted in: Missiology|May 1, 2009No Comments

” Besides this you know the time, that the hour has come for you to wake from sleep. For salvation is nearer to us now than when we first believed. The night is far gone; the day is at hand. So then let us cast off the works of darkness and put on the armor of light.”

I’m in Romans in my personal study in the Word – in fact, I’ve been in Romans for almost a year now. In reading through chapter 13 again this morning, the Lord was just pressing upon me the importance of “waking up from sleep”. Now, we know that this letter was written to believers in Rome, and in particular this statement is meant for the Christian. The Bible speaks of those who don’t know Christ as “dead”, it doesn’t refer to them as not sleeping, so we know this is for the believer. Now after further reading, I was thinking about in the physical, what causes people to sleep when really they should be awake – I thought about eating to much, over indulging I guess you could say. Also, being bored can be an excuse to just sleep, or maybe a listless attitude towards things could cause some to just sleep and not worry about life. I’m sure there’s a lot more that I missed. Now if we apply these things spiritually, we can see how these things can so easily creep into our lives to cause us to spiritually “fall asleep”. I was reading Barnhouse on this section and he wrote,

“Have we indulged of the stupefying things of this world and thus fallen asleep ? Have we been living in the close atmosphere of worldliness instead of breathing the fresh air of prayer? Have we been so lazy that we yawn in the face of God? Are we so involved with self that we try to force the knowledge of God below our conscious minds ? ”

God calls us to wake up,to be alert. Paul says that the “night is far gone, and the day is at hand”. The “night” is the world that we live in today, with all of it’s sin and pride and the “day” is that day in which Jesus will come and reclaim this world which is rightfully His. Now Paul says that the “day is at hand” and obviously it is more “at hand” today then ever before. We read all throughout the N.T. verses about how the return of Christ should have a purifying and sanctifying affect in our daily walk with Jesus. Looking around the world today, I really believe that more than ever we as believers must “wake up”. Instead of falling asleep in my comfortable life, or getting so caught up in the things of this world (whatever they may be), now more than ever, we should be awake, and telling others of the “day” that is at hand!

I want to write about this passage a little more in the next post. Be praying for those who have never heard, and also pray that you could have the privilege to go and tell them the everlasting Gospel of Jesus Christ. With God’s grace brothers and sisters, let’s do it!