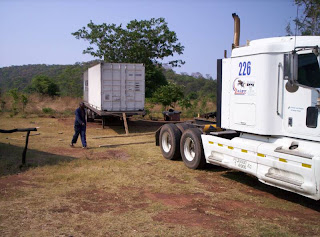 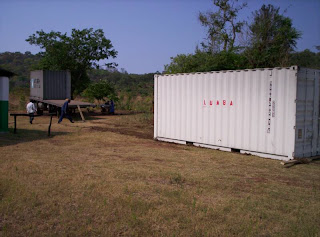 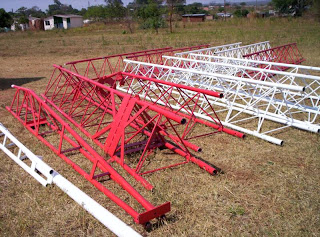 I am very excited to write that after 14 months since first purchasing our 20 ft. sea freight container, it has finally arrived in Kasempa, Zambia! It took around 5 months from the time it left New York (check out my post on April 22nd) until the time it arrived at Lumba Christian Ministries in Kasempa, Zambia – that was partially because it was stuck in Mozambique for 2 months due to contract negotiations with our trucking company. I was so relieved to read in the email from Ron Wint (Founder of Lumba Christian Ministries) that not only did the container get there, but that the security lock had not been tampered with, and everything that we had filled the container with (to overflowing) was still there, and accounted for. Praise the Lord !
So now, we are planning on arriving in Kasempa, Zambia in early January with our team to install the radio tower, and set up the antenna, receiver, and radio station there on the property. 1,000 solar powered radio’s with a fixed signal to their radio station (90.7 f.m.) were donated by Galcom, and between the radio’s and the setting up of the first ever F.M. radio station in Kasempa, we know there will be a “buzz” all over town when we get there in January. Please continue to pray that we can set up the tower and antenna with no problems, and that everything would run smoothly before the end of January, which is when their permit expires! They will not be able to extend it after that if something would go wrong !
Thanks for all of your prayers regarding this container. I know that the Lord has heard all of them, and in response has done what at many times I considered to be impossible ! Please continue to pray that the Lord would be glorified in this project, and that MANY, MANY, MANY would come to know Him as their LORD through the broadcast of His Word 24/7 in Kasempa, Zambia.
Blessings,
Carlos